MIAMI GARDENS, Florida — Even at the Super Bowl, they mourned Kobe Bryant.

San Francisco's Richard Sherman showed up for the Super Bowl in a Bryant jersey, the start of numerous honors dedicated to the basketball legend on football's biggest day. Among them: Players from the Kansas City Chiefs and San Francisco 49ers lined up for a moment of silence to commemorate all nine victims of last weekend's helicopter crash, including Bryant and his 13-year-old daughter Gianna.

The teams stood on their respective 24-yard lines — in tribute to Bryant's No. 24 jersey. Some fans at the game wore Lakers jerseys, and a few even had Bryant's Lower Merion High School jersey.

"Ladies and gentlemen, please join in a moment of silence as the 49ers, Chiefs, and National Football League extend our deepest condolences to the friends and families of those lost this past week. ... They will never be forgotten," was the message that blared through Hard Rock Stadium. 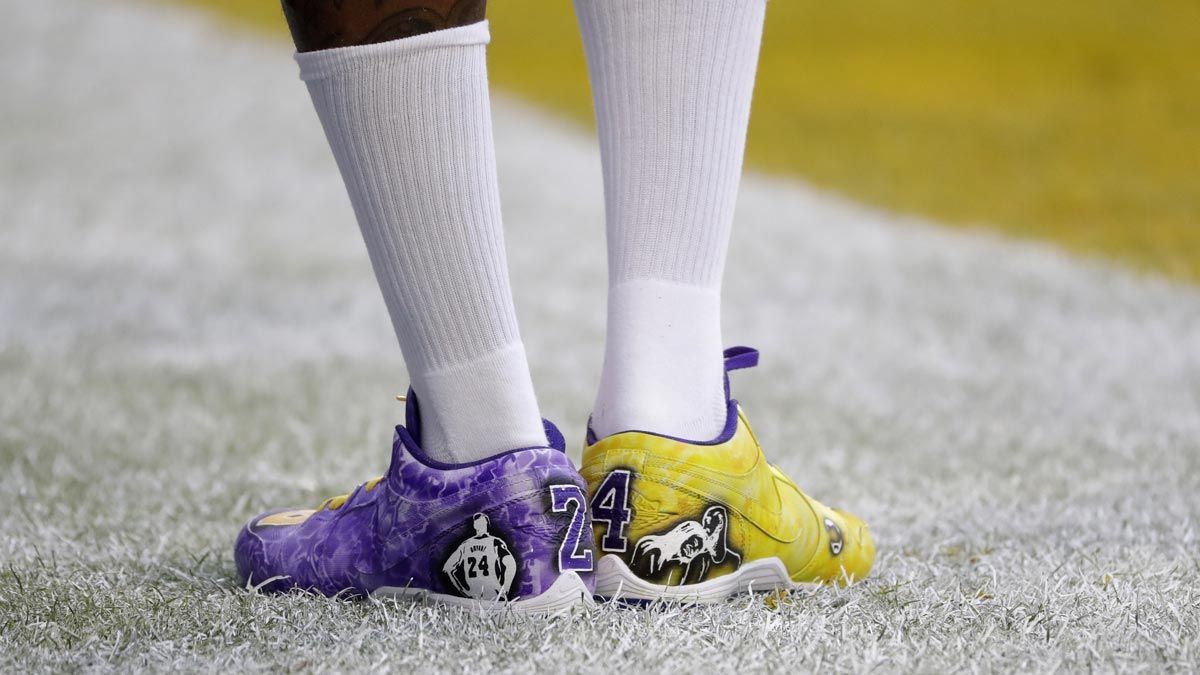 Sherman also appeared on Fox's pregame show to read a poem called "Dear Football" — adapting most of what he said from Bryant's "Dear Basketball" poem that he penned as a way of announcing that the 2015-16 season would be his last with the Lakers and in the NBA.

"I played through the sweat and hurt. Not because challenge called me. But because YOU called me," Sherman read, copying Bryant's words exactly in that particular passage. "I did everything for YOU. Because that's what you do when someone makes you feel as alive as you've made me feel." 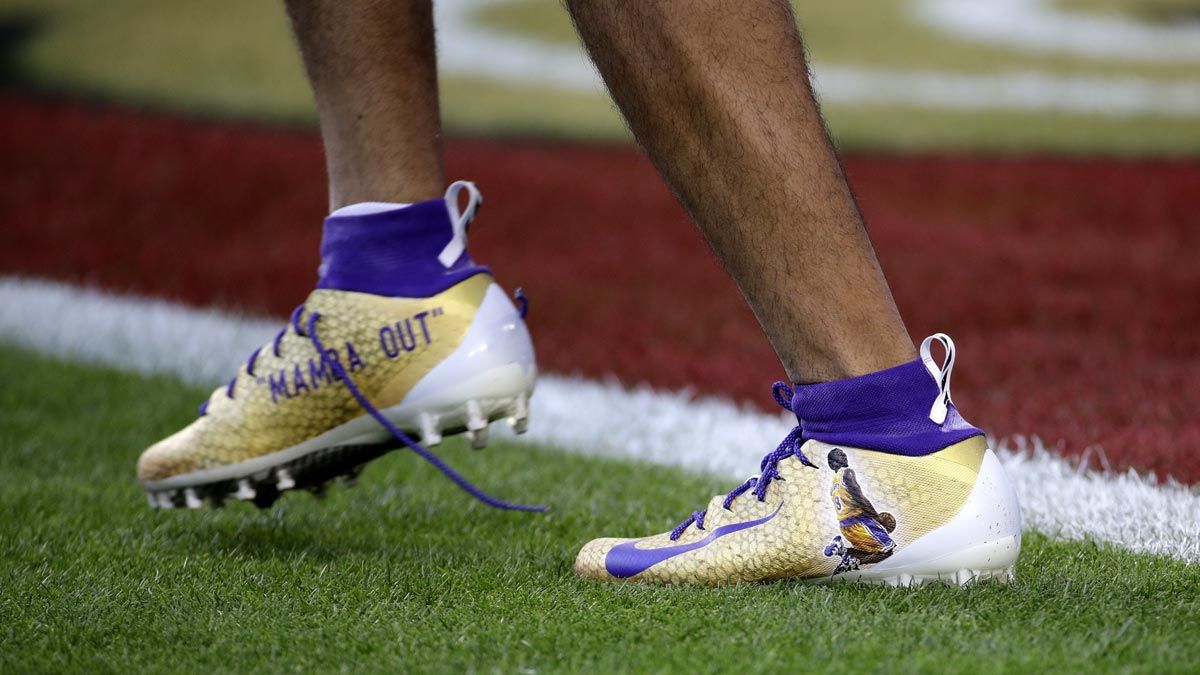 During warmups at the Super Bowl, plenty of players wore cleats designed with various tributes to Bryant. San Francisco's Dante Pettis had purple-and-gold ones with the words "Mamba Out" — the final two words of Bryant's retirement speech following his 60-point farewell game in 2016 — emblazoned on the sides. The 49ers' Emmanuel Sanders wore a pair with the words "Rest In Peace" and Kansas City's Demarcus Robinson had images of Bryant and his number 24 on his cleats.

Tributes all over other aspects of the sports world continued Sunday, exactly one week after the crash. At the Miami-Pittsburgh men's college basketball game, Pitt fans tossed purple and gold confetti — Lakers colors — in the air after the Panthers scored their first basket. And before a Serie A soccer match at Olympic Stadium in Rome between Lazio and Spal, Bryant's photo was displayed on the jumbo video screens.

At the PGA Tour's Waste Management Phoenix Open, the tour joined players with a 16th-hole tribute to Bryant by using his two Lakers uniform numbers to cut the final-round pin position on the stadium par 3. 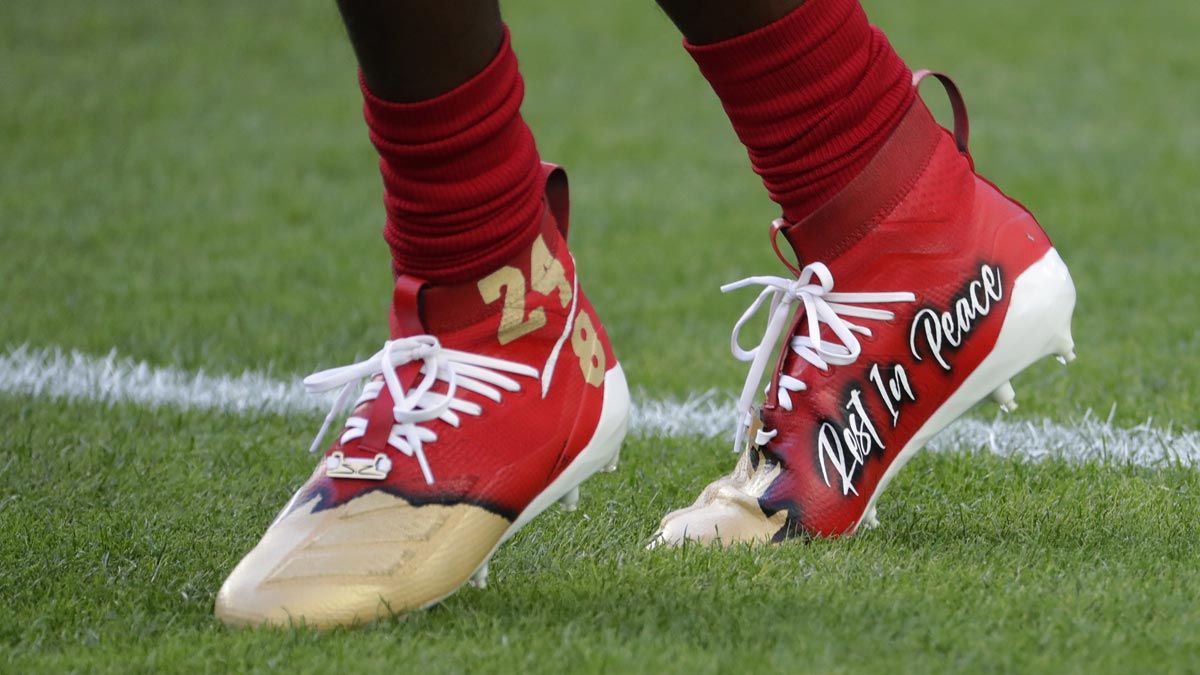 The pin was placed 24 yards from the front edge and 8 yards from the left edge on the rowdy hole that holds more than 20,000 fans. The yellow flag had a 24 on one side and an 8 on the other, and large matching numbers were painted in the grass in front of the green.

On Saturday night, Matt Dumba of the Minnesota Wild skated in a 24 jersey -- another way of paying homage to Bryant.

Sherman ended his poem with "We love you, Kobe. We love you, Gianna. Love always, Richard."