Colin Kaepernick: Timeline of a gesture and its echoes

COLIN Kaepernick was a second-round draft pick in 2011. The next year he led the San Francisco 49ers to the Super Bowl. By 2016, he had begun kneeling on the sideline at games during the national anthem to protest social injustice and police brutality.

Soon after, he was gone from the NFL, and he has not played since. Here's a timeline of Kaepernick's pro football and post-NFL days since he first kneeled during "The Star-Spangled Banner."

Aug. 26, 2016: During the anthem before a Packers-49ers preseason game, Kaepernick sits on the San Francisco bench. Kaepernick says he sat because the country "oppresses black people and people of color." His action does not attract immediate national attention. He mentions that he had earlier not stood for the anthem.

Aug. 27, 2016: Kaepernick's sitdown begins drawing headlines. Some condemn him for dishonoring the flag and country. Others applaud his motives. The NFL says players are encouraged but not required to stand for the anthem.

Aug. 30, 2016: Former NFL player and ex-Green Beret Nate Boyer suggests to Kaepernick to kneel rather than sit during the anthem.

Sept. 1, 2016: Kaepernick kneels before a road game against the Chargers and says he will donate $1 million to organizations supporting his aims.

Sept. 7, 2016: NFL Commissioner Roger Goodell says he "doesn't necessarily agree with what (Kaepernick) is doing," but supports players who seek changes in society. 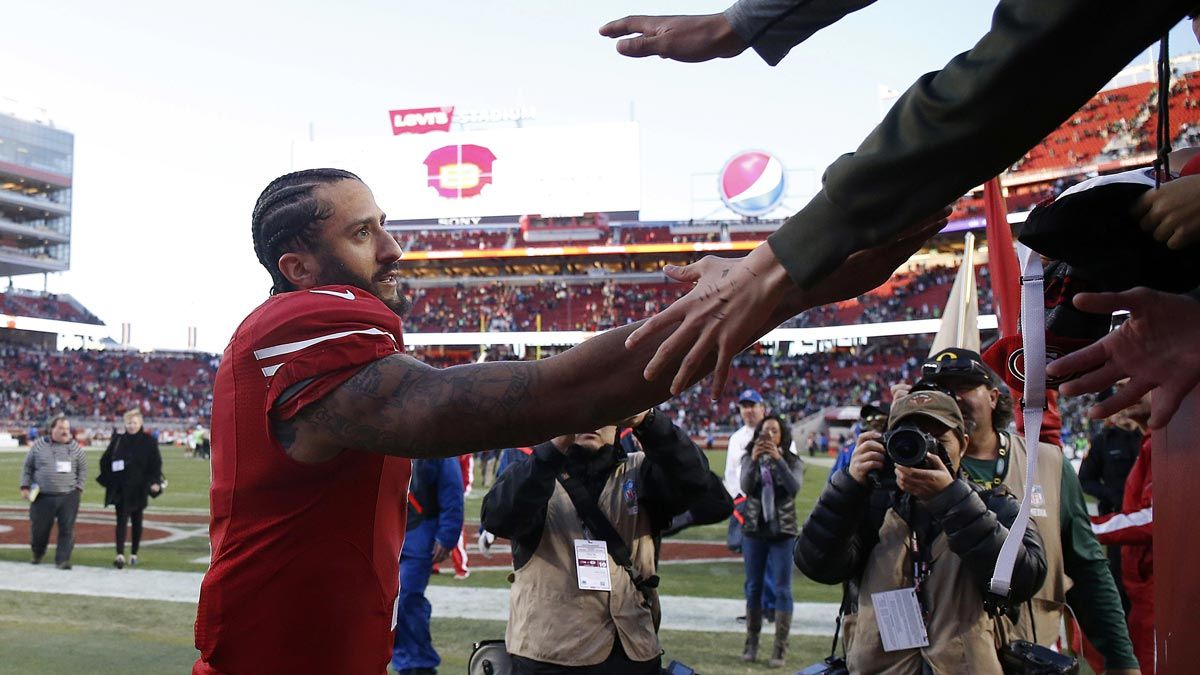 Sept. 11, 2016: On the first full day of the regular season, several players kneel during the anthem.

Sept. 12, 2016: Kaepernick and safety Eric Reid kneel before the 49ers' home game against the Rams. Kaepernick is rehabbing a knee injury and doesn't play.

Sept. 27, 2016: After criticism from Republican presidential candidate Donald Trump, Kaepernick responds: "He always says make America great again. Well, America has never been great for people of color. That's something that needs to be addressed. Let's make America great for the first time."

March 3, 2017: His stint with the 49ers, who planned to cut him, ends as Kaepernick opts out of his contract.

Aug. 25, 2017: Although several teams have shown moderate interest in Kaepernick, he gets no contract offers. Supporters say team owners are blackballing him, and a group rallies outside NFL headquarters in Manhattan. 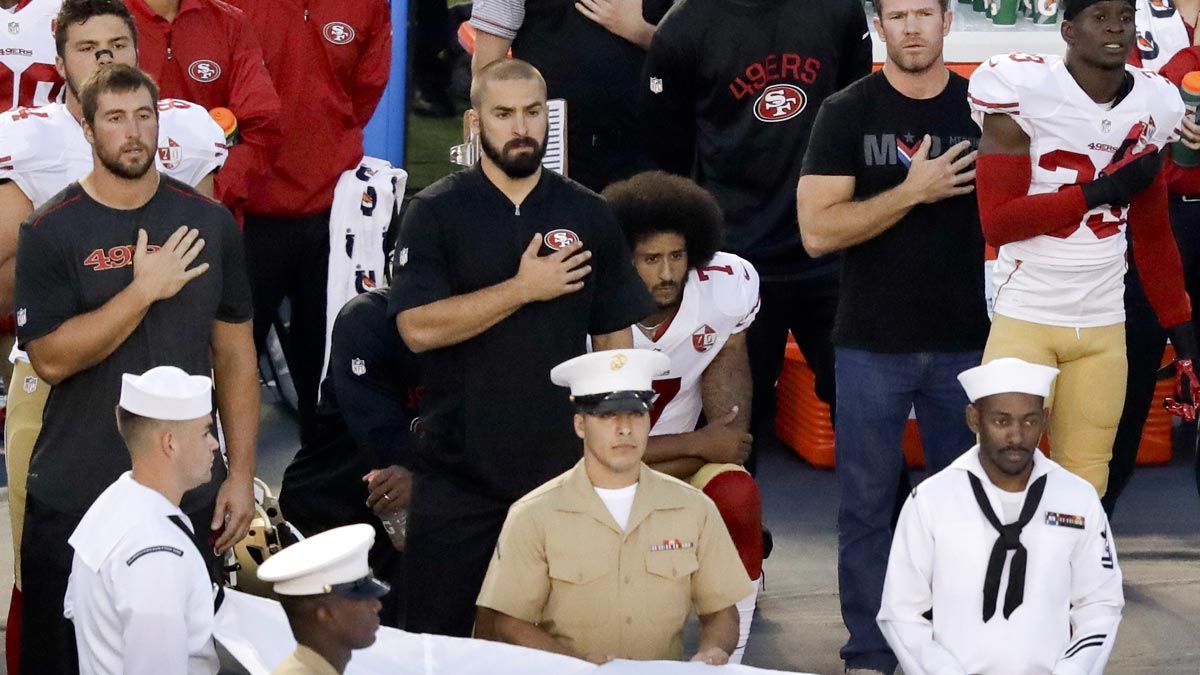 Sept. 10, 2017: Without Kaepernick in the league, players still kneel during the anthem.

Sept. 26, 2017: Dallas Cowboys owner Jerry Jones locks arms and kneels with his players before the anthem but stand while it's played.

Oct. 15, 2017: Kaepernick files a grievance against NFL team owners, citing collusion to keep him out of the league.

April 18, 2018: As part of their collusion claim, Kaepernick and his representatives depose Goodell and a variety of NFL owners and executives, including Jones.

May 23, 2018: NFL owners approve a rule banning kneeling during the anthem. Players have the option to stay in the locker room. President Trump applauds the rule. NFL owners soon retract the rule because of its divisiveness.

Sept. 3, 2018: As the regular season approaches without Kaepernick again, Nike makes the quarterback the focal point of its sports advertising campaign. "Believe in something, even if it means sacrificing everything. #JustDoIt." There are calls for boycotting Nike as well as praise for the apparel company. 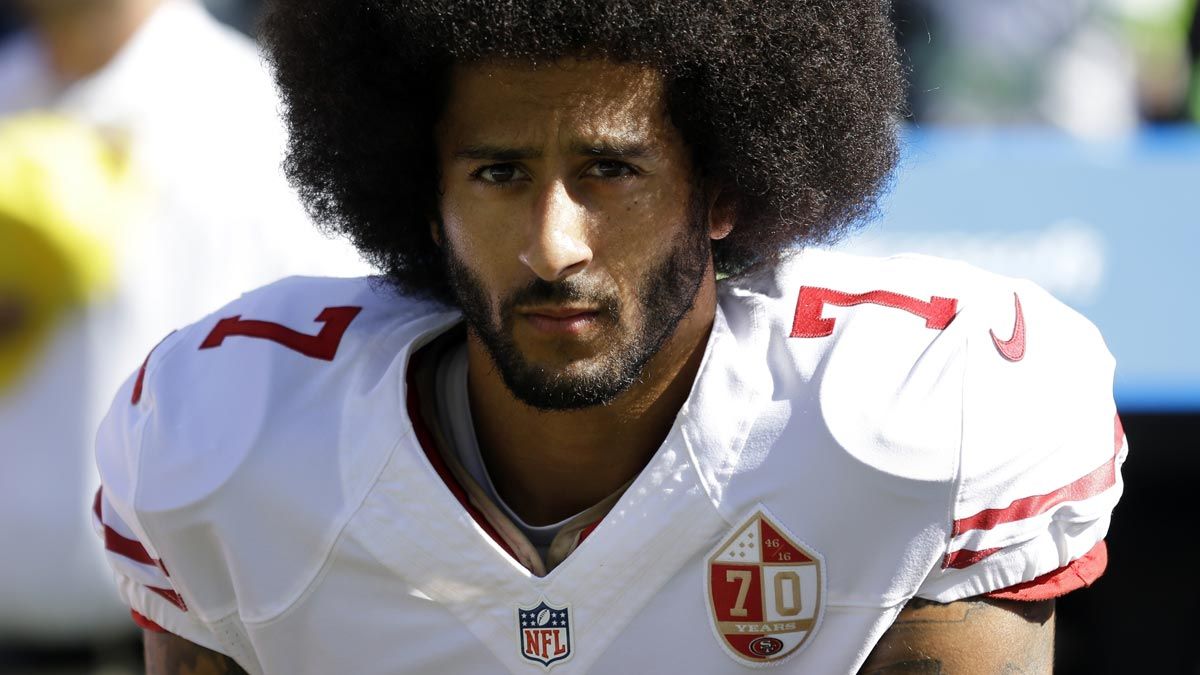 Sept. 9, 2018: A second straight season begins with Kaepernick not on a roster, but with some players still kneeling during the anthem.

Sept. 26, 2018: Reid, a free agent, finally finds a team, the Carolina Panthers, and is congratulated on social media by Kaepernick.

Feb. 15, 2019: The NFL reaches settlements with Kaepernick and Reid on collusion grievances. Monetary figures are not disclosed.

Aug. 8, 2019: Eyeing an NFL job, Kaepernick sends social media message to teams that includes a video of him working out.

Sept. 8, 2019: The third consecutive full opening day of an NFL season without Kaepernick.

Nov. 18, 2019: Finally, a workout with NFL teams, but chaos ensues. Kaepernick moves the session in Atlanta, contending the league was not transparent in how it would be run, who would attend and who would be liable for potential injuries. A limited number of teams make it to the workout. Says Kaepernick: "We all know why. I came out there and showed it today in front of everybody. Stop running from the truth. Stop running from the people." 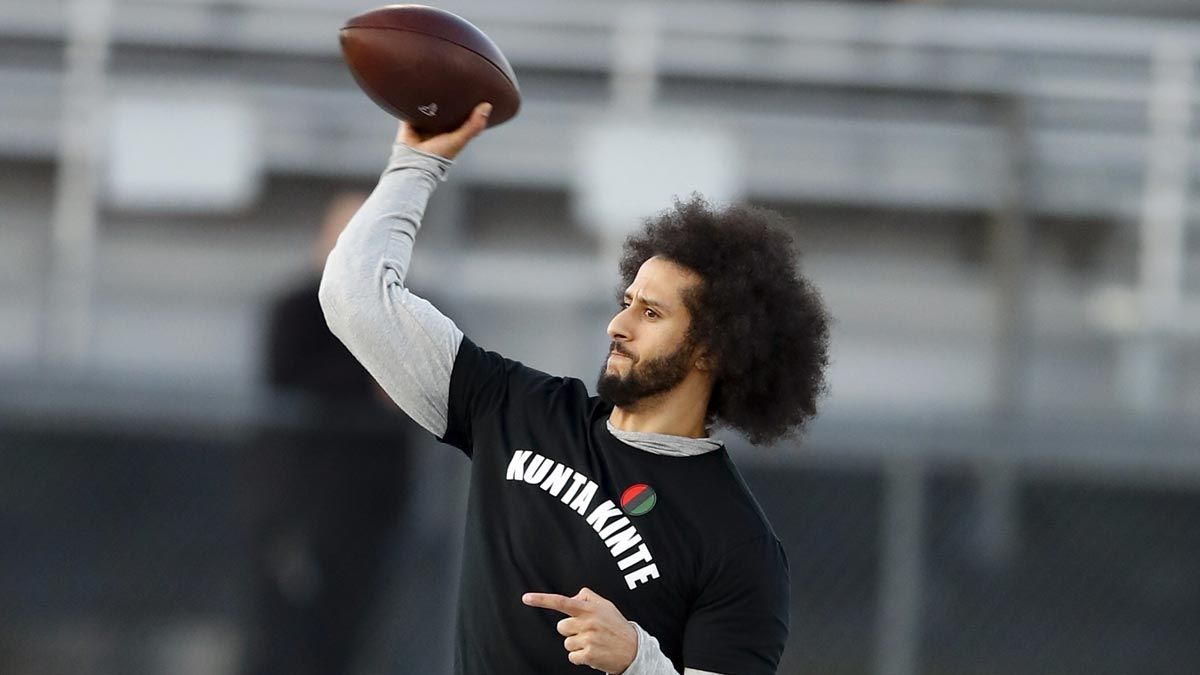 Feb. 13, 2020: Kaepernick announces he will write a memoir, though he still wants to play football.

May 29, 2020: Sparked by the death of George Floyd, a black man who died after a white police officer in Minneapolis pressed a knee into his neck for nearly nine minutes, Kaepernick offers support to nationwide protesters. "We have the right to fight back! Rest in power George Floyd."

May 30, 2020: The NFL's statement on Floyd's death and the ensuing protests mentions Kaepernick's demonstrations during the anthem.

June 4, 2020: Many of Kaepernick's supporters within the league release a video urging the NFL to denounce racism and further promote social justice.

June 5, 2020: In a video, Goodell apologizes to players for not listening to them earlier. He encourages them to protest peacefully and denounces racism. He says the league will be part of "how we can improve and go forward for a better and more united NFL family."

June 5, 2020: Trump reiterates his criticism of Kaepernick after New Orleans Saints quarterback Drew Brees apologizes for comments about protesters' goals: The president says on Twitter the player "should not have taken back his original stance on honoring our magnificent American Flag. OLD GLORY is to be revered, cherished, and flown high... We should be standing up straight and tall, ideally with a salute, or a hand on heart. There are other things you can protest, but not our Great American Flag - NO KNEELING!"